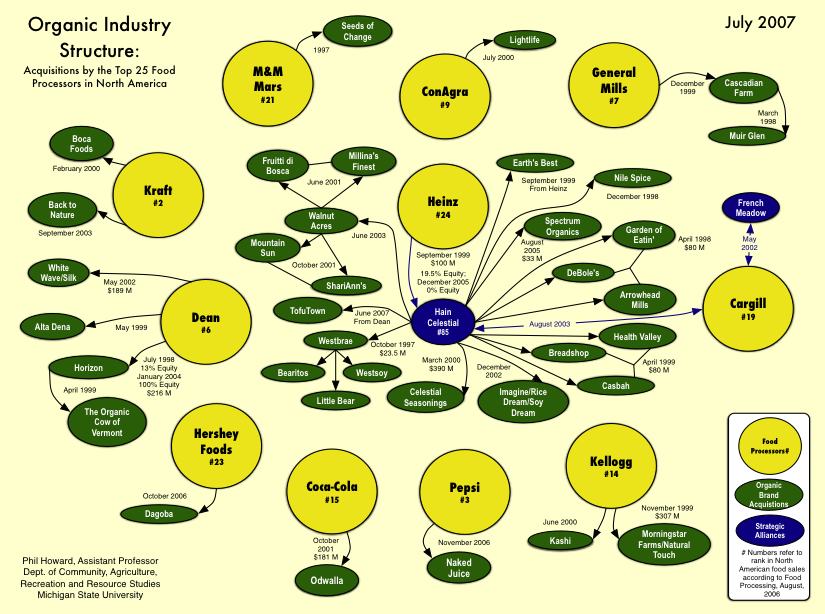 I was researching Cargill when I found this interesting who-owns-who graphic. It was done by Dr. Philip H. Howard, Assistant Professor in the Department of Community, Agriculture, Recreation and Resource Studies at Michigan State University. He seems like he would be an interesting person to talk to; he did his pre-doctoral research at the Center for Agroecology and Sustainable Food Systems at the University of California.

Dr. Howard has a lot of these graphics – most of them current as of July 2007 – on his website. I couldn’t find any poster-sized versions for sale, but if I run across them I may just have to purchase them… I wonder how well they would be received posted at the Food Co-op.

One of the biggest issues I struggle with at the food co-op is the whole Corporate Organics structure. Cargill, the largest privately owned corporation in the United States and also in the top four factory-farmed meat producers (others include Sara Lee, Hormel, and one more I can’t recall offhand because my Vegan Sourcebook isn’t with me… ConAgra?) is one of the primary suppliers to Hain Celestial, which owns/produces many, many, many of the products on our shelves. But, our store is here to serve our customers and most people simply don’t care who makes their food or who gets paid for it.

I’d like to do more consumer education (or at least volunteer and member education), but it seems – at least in our small town – people just aren’t interested in learning. We post signs and newspaper clippings that nobody ever reads. I printed some information on our chocolate in our recent newsletter, and nobody cares that Wilbur Buds are owned by Cargill. I even posted a Who-owns-who article on the bulliten board behind the counter (for volunteers to read), and someone threw it away.

The Wilbur Buds, especially, push my buttons. It’s a pain in the ass to order from the company, the food co-op pays retail price (no wholesale deals) for the chocolate – plus shipping/handling, the chocolate isn’t farmer-friendly, they won’t ship in the summer, they won’t accept checks (actually, I got a credit card for the co-op just for these stupid chocolates – better than using my personal credit card!), and the co-op whose principles are to “promote sustainable and locally grown foods” is giving money directly to Cargill with the purchase. Our volunteers and members know that Cargill owns Wilbur… but they all keep buying the chocolate and shrug, “What can you do about it?” 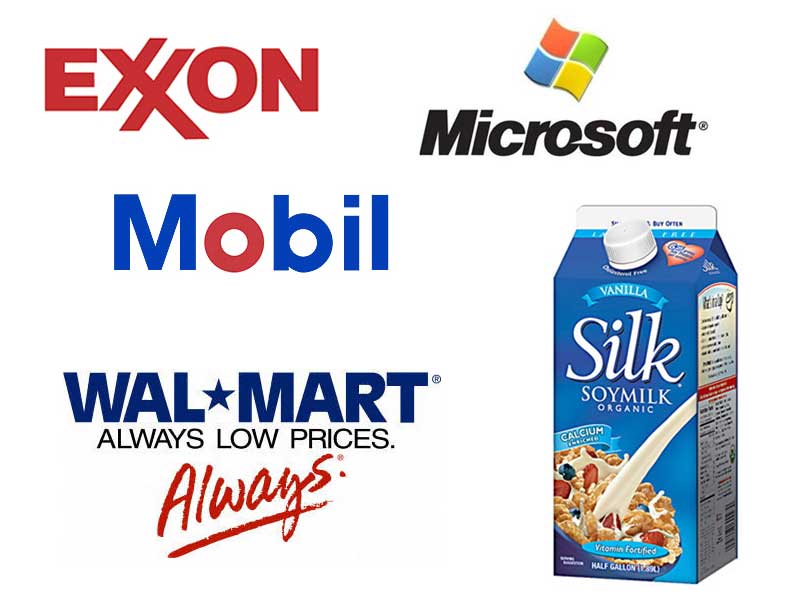 More and more Americans are switching from dairy milk to soy milk – mostly for the health benefits of soy protein, lactose intolerance, and because it’s frequently in the refrigerators on many television shows and movies. While most people aren’t buying the dairy alternative for ethical reasons, I wonder how many people who do realize that their favorite brand of soy milk is made by the largest dairy processor and distributor in the world.

White Wave Foods (who owns Silk) is a subsidiary of Dean Foods. This means that purchasing the most widely available (at least in the Midwest) meat- and dairy-alternatives is giving money to the unethical treatment of cows in factory farm conditions.

Dean Foods owns many dairy companies, including Horizon Organic who was recently boycotted by many individuals and health food stores for their false claims about organic production running under factory farm conditions. Dean Foods also licenses Land O Lakes products, which is distributed by White Wave as well. Talk about a huge vicious circle.

Other products that play into the Dean Foods/White Wave hands include Hershey’s milk shakes, International Delight creamers, and over 40 brands of milk. They are also a leading supplier of branded and private label pickles, olives, relish, sauces, puddings, and dips. About 80% of store-brand pickles are private labeled Dean Foods products. 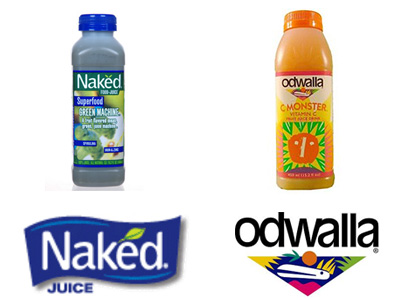 The Food Co-op recently introduced Naked Juice after a screaming demand from the public. The on-campus cafÃ© at the University carries Naked Juice, purportedly sold at $5 a bottle! So, the food co-op now carries the juice at a skinny $3.14 for 15.2 fluid ounces.

I haven’t tried the Naked Juice, and I’m really not tempted to – mostly because they are owned by PepsiCo Products. I’m trying to vote with my food dollars – I don’t really want to give my money to the company that manufactures Doritos, Frito-Lay, Quaker Oats, and Mountain Dew… not to mention who until recently owned Kentucky Fried Chicken (gulp!). Kentucky Fried Chicken (see their website here) is now a division of Yum! Foods (as are Taco Bell and Pizza Hut).

In 1991, PepsiCo partnered with a company in Burma in order to distribute their products there. Turns out, this company was partnered with the Burmese military, allegedly responsible for some of the worst human rights violations in the world. They did eventually break their ties with the company in 1997, but not until after years of protest and boycotting. Even the Coca-Cola company stopped doing business with the military in Burma before PepsiCo.

Speaking of Coca-Cola, when I was in Washington, D.C. earlier this year I purchased an Odwalla juice in one of the senate buildings. To my disgust, it was one of the only non-fried/non-meat items in the cafeteria. I later found out that Naked Juice’s counter-part was owned by PepsiCo’s counter-part. Coca-Cola acquired Odwalla in 2002 – they paid a whopping $180 million for the “healthy juice.” (Here’s an interesting article on Odwalla and Corporate Social Responsibility… ).

Why keep away from Coca-Cola? Coca-Cola is the largest manufacturer and distributor of nonalcoholic beverage concentrates in the world. Technically, Coca-Cola only manufactures their concentrated sugar syrup, which is then sold to franchises. They supply to Nestea (joined with NestlÃ©), they have a huge foot in the bottled water industry (see: 5 Reasons Not to Drink Bottled Water), and they have been strongly criticized for their labor practices.

Sure, Coca-Cola and Pepsi have both made some nice charitable donations. But any giant corporation has to do that to keep their public image (and keep their tax write-offs).

Recently I mentioned WholeSoy yogurt, just a couple days before the company had a number of products recalled because they may have contained dairy.

Given vegan standards (and taste too!), Wild Wood Organics wins the coin flip for soy yogurt. Their website boasts:

Wildwood Soyogurt is NOT produced on equipment shared with dairy. We own and operate our own non-dairy facility. We are the only brand of Soy Yogurt that is not manufactured using shared dairy equipment.

The company itself is fairly interesting. It’s a joint company (Pulmuone and Wildwood) with roots stemming both from a family farm in Iowa and a farming cooperative in Korea. The cooperative in Korea (Pulmuone) was started in 1955, and entered the US in 1991. Since 1978, Wildwood has been creating organic/natural vegetarian products – apparently their fame started with the BRT sandwich (Brown Rice & Tofu). Their soybeans mostly come from the midwest, though the company is known best on the west coast. The two companies joined in 2004. (Visit Wild Wood’s website and Pulmuone’s website).

As you can see, Niko likes the yogurt as well. I’ve been special ordering it weekly from the food co-op, and between Chris, Niko, Nigel, Puck, and myelf it’s pretty easy to go through a case of 12 in a week. Nice to finally have some breakfast foods around the house. We all agree that Vanilla is the best – though Niko is fond of blueberry as well.

I’m now considering ordering a case of plain (unsweetened) to see if I can use it as a culture to make my own soy yogurt (with homemade soymilk from local soybeans, of course). When time permits…